Inside the Ad Testing Metrics: Conversion Per Impression (CPI)

This week we’re featuring everything you need to know about using CPI (Conversion per Impression)  as your testing metric. Please, consider reading our article on scientific Google AdWords split-testing if you would like to know more about how to set it up and evaluate results.

This is a metric that shows the ratio between impressions and conversions.

It’s impossible to say which is better since that information relies on two different metrics: CTR and Conversion rate.

What CPI does is combine these two different metrics to form one single metric that will show you which ad will receive the most conversions from the impression.

How CPI is Calculated

CPI is calculated by dividing total impressions by the total conversions.

In this example, ad 3 has the highest CPI and ad 2 has the lowest Conversion per Impression.

The Advantage of using CPI as Your Testing Metric

If our goal is a $30 CPA and we want the most conversions under $30; then we’d eliminate all the ads with a CPA higher than $30 and pick the highest CPI ad from the ones that are left as our winner; which is ad 5.

If we only wanted 10 leads a month and therefore, pay as little as possible for those 10 leads; then ad 6 would be our winner as it has the lowest CPA of all the ads and it can reach 10 conversions per month (assuming this was monthly ad data).

Assuming we want the most conversions possible, or even the most possible under a $32 CPA target, then ad 3 is our clear winner. However, we should learn from the other ads in our next set of ad tests. This is where examining ads that lost in your overall metric but won in a single metric is useful.

For example, ad 4 is a clear CTR winner. Why? Was there a line in the ad that was very attractive to users? We might want to use that line for our next ad test. We could duplicate ad 3, add that line, and then run another test.

Why did ad 6 have such a great conversion rate? It did have a very low CTR. Odds are, this ad was ‘pre-qualifying’ users  with ad text that was meant to filter out users. We could look at what that qualification is, use it in a new ad 3 duplicate, and test that combination.

Finally, ad 2 was a conversion rate failure. Why? We might want to add a note about a line to avoid as this ad clearly attracted the wrong types of clicks.

When Not to use CPI

The one downfall of CPI is that it doesn’t care about revenue or total order amounts. If you have an ecommerce site and want to base your conversions off of ROAS or revenue targets, CPI is not a great number to use.

CPI is great for lead generation, or the most conversions possible. However, since revenue and ROAS are not numbers used in its calculation, there are other metrics, such as ROAS or RPI/PPI (revenue/profit per impression) metrics that are better to use for ecommerce companies. We’ll cover these additional metrics in the coming weeks. 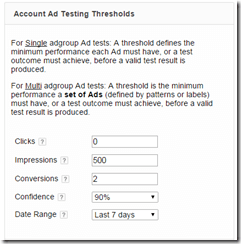 When considering CPI as your metric, there are three considerations to use:

When you consider CPI as a testing metric, you usually care about two metrics: Impressions & conversions from a minimum data standpoint.

As for minimum clicks, this is usually a number you can ignore. You don’t want very low CTR ads to stop your test. As CPI is based upon only impressions and conversions; usually CPI testing completely ignores minimum clicks since clicks aren’t even used in calculating that metric.

Conversion per impression is one of the best ad testing metrics you can use since it is a simple number that lets you see which ad will lead to the absolute most conversions.

The largest downside of CPI testing is that it does not take into account revenue per conversion. So while it’s a great metric to use for lead generation companies, it might not be suitable to ecommerce companies.

If you have hard CPA targets, then you can use CPA as a filter to remove ads that are above your target CPAs and then pick your highest CPI ad as your winner; so many companies should use both CPA and CPI testing metrics to choose their winners.

If you would like to easily see your Conversion per Impression metrics along with other testing metrics (such as CPA), take a look at what Adalysis has to offer. You can easily see your CPI along with many other metrics to make quick determinations as to what ad really is the best one to use for your account to ensure that you are hitting your advertising goals.